A project focused on creating inclusive and vibrant public space

Civic Street in its current form has been around since 1975, in an area that has been intensely urban and industrial since at least 1790.

When the Great Canal – as it was once called – opened in 1790, it was the biggest single venture undertaken in Scotland up to that time and a source of great national pride. It provided vital trade and transport links, with over 3 million tonnes of goods and 200,000 passengers being transported each year by the mid 1800’s. The canal was at the heart of the area’s industrial boom, spawning industries such as timber mills, glass works, foundries, cotton and silk mills, flour mills, granaries, and warehouses, which filled the under-developed land on both sides. Breweries and distilleries also sprang up along its banks across Glasgow, with Port Dundas being the largest distillery in the world at one time. It wasn’t long, however, before the canal was overtaken by the power and speed of the railway and sunk into disuse and disrepair.

By the 1840s, previously scattered communities had united through industrial activity and the area was incorporated within the city boundaries. As a result, the Cowcaddens district became the most densely populated urban area in the developed world in the 19th century, mainly due to the employment opportunities provided by industry in the district. However, numerous jobs were lost following industrial decline along the canal corridor causing communities to disperse and buildings and sites to become vacant and derelict. The social and cultural infrastructure of the area – spaces for education, health care, entertainment, outdoor public parks – that once supported local communities were lost, intensifying the existing issues of social and economic deprivation.

In 1963 the canal ceased to be a navigable waterway, until it was reopened in 2001 as part of the £78m Millennium Link – the largest canal restoration ever in Britain. The project included the construction of the iconic Falkirk Wheel that reconnected the Forth & Clyde and Union Canals for the first time in over 70 years.

The area immediately to the south of Civic Street was once home to The Phoenix Foundry, one of Glasgow’s oldest iron foundries who produced the main entrance gates to the Glasgow Necropolis. It was originally established by Thomas Edington around 1800 and remained located off of Garscube Road until 1890. Following this, the foundry moved to a new location and the Corporation of Glasgow opened a park for the public, Phoenix Park, on the site. The urban form of the site and surrounding area remained relatively stable for the majority of the first part of the 20th Century. A combination of major social, economic and spatial changes contributed to a dramatic remodelling of the area in the later part of the century. During this time industries closed, the tenements were cleared and the local population was dispersed. Phoenix Park, once a social and recreational hub, was subsequently lost during the construction of the M8 motorway. 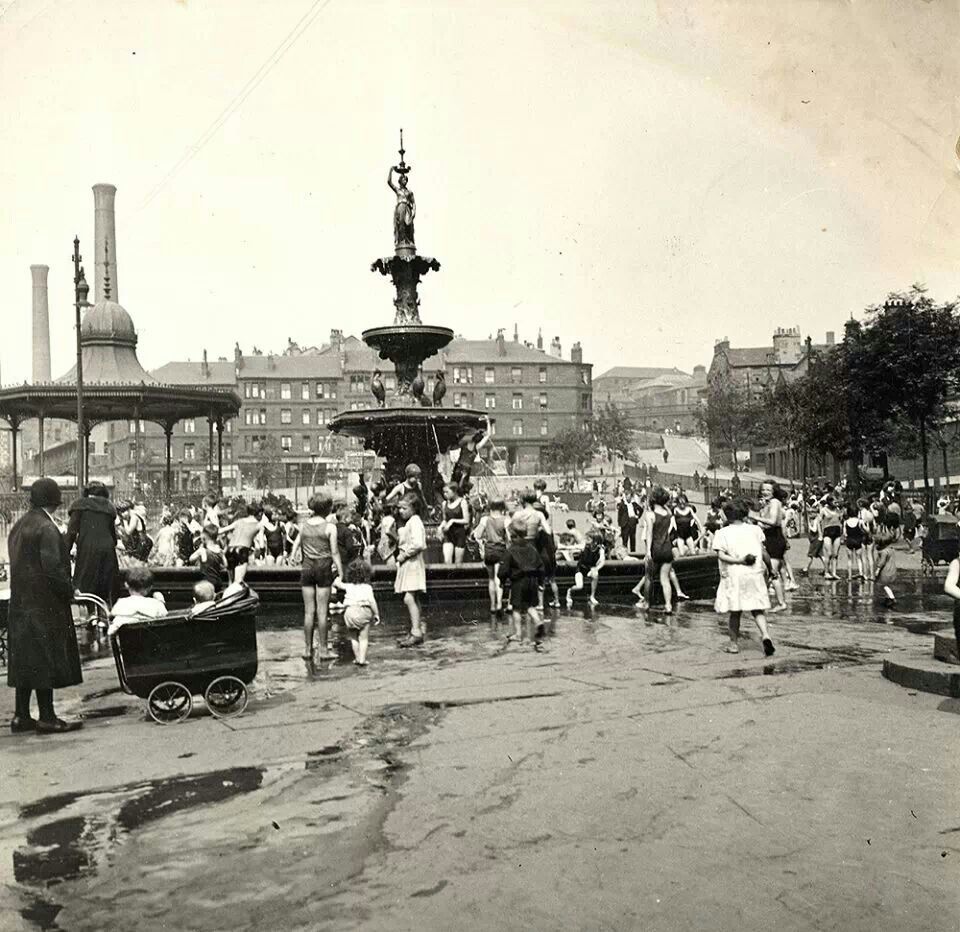 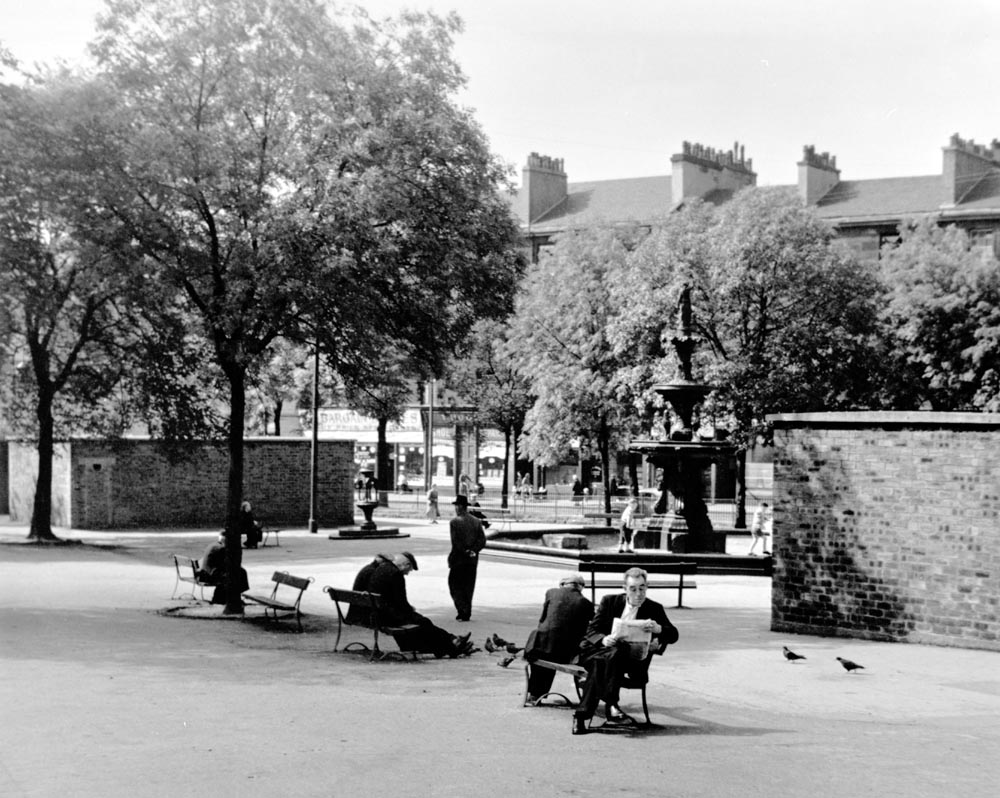 The First Planning Report to the Highways and Planning Committee of the Corporation of the City of Glasgow – eventually known as the Bruce Report – was published in March 1945. It influenced an intensive programme of regeneration and rebuilding efforts which took place in the city and its surroundings from the mid-1950s until the late 1970s. The author of this report was Robert Bruce, a Glasgow Corporation Engineer at the time. Bruce proposed many high-speed transport links, one of which was the ‘Glasgow Inner Road and Ring’ this included a Renfrew motorway, a Stirling motorway, a Maryhill motorway and a south eastern motorway connecting Glasgow with the wider motorway network. These proposals were not acted upon until the 1960s when the initiative began as a sweeping programme of clearing and construction.

The Monklands and Renfrew motorways were completed forming what is now known as the M8. These two motorways form the northern and western flanks of the planned ring road. But the M8 caused such substantial protest by carving through long standing communities – destroying much of Cowcaddens, Charing Cross and Anderston in its construction – that the rest of the Inner Road Initiative was eventually shelved.

The Glasgow section of the M8 is unusual amongst UK motorways in that it bisects a large urban area, whereas many other motorways normally bypass city centres. It has caused a significant long term negative impact – severing the north of Glasgow from the city centre. The site on Civic Street sits directly north of the M8 – which creates a hostile barrier to the south of the city. 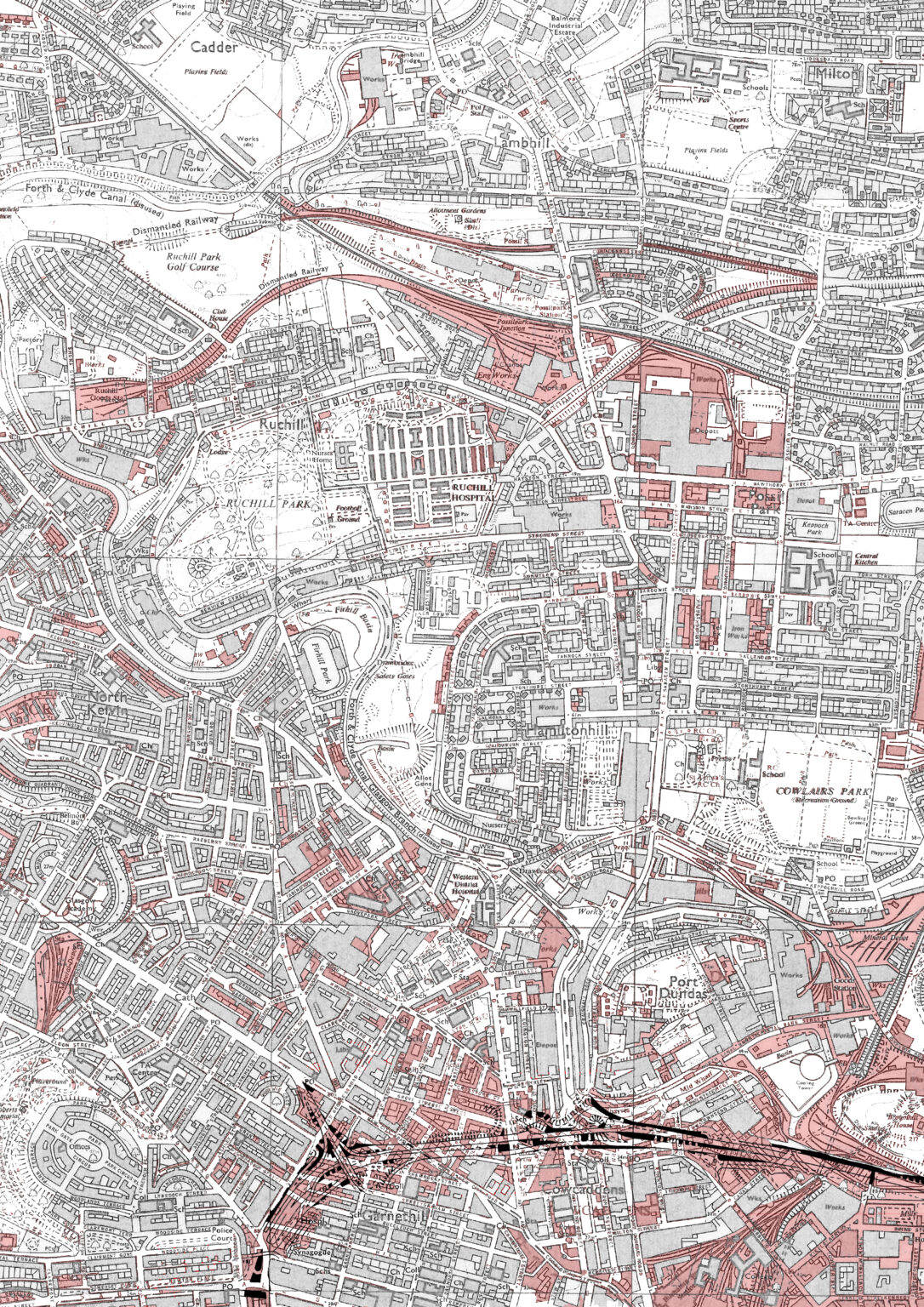 Map: overlay of historic maps from 1968 and 1975, with buildings in red being demolished in the period between the making of two maps. Black contour of the M8 is shown passing through residential neighbourhoods of Cowcaddens and Garnethill 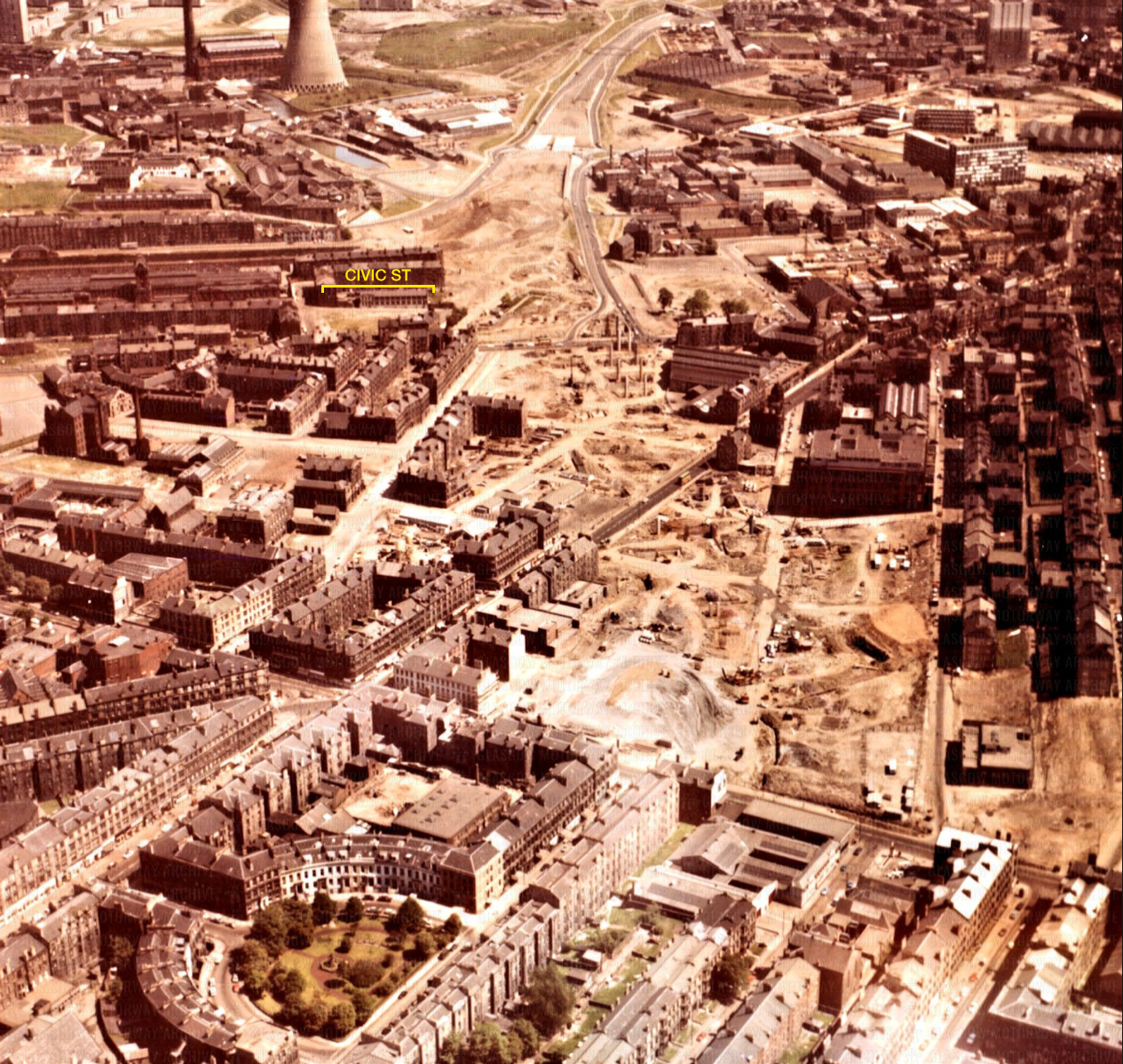 Civic House, originally known as ‘Civic Press’ was a printing works which specialised in left-wing publishing and printing such as election posters, leaflets and placards for demonstrations. It was a survivor of the radical activity so characteristic of early 20th-century Glasgow. The image below shows the front of the building, which was built in the early 20th century of rendered brick, probably to resemble the fashionable concrete buildings of the period. Note the large number of windows, likely to facilitate light requirements for the hand composition of type. Originally the building was surrounded by tenements but these were cleared away in the late 1960s, leaving Civic House isolated. 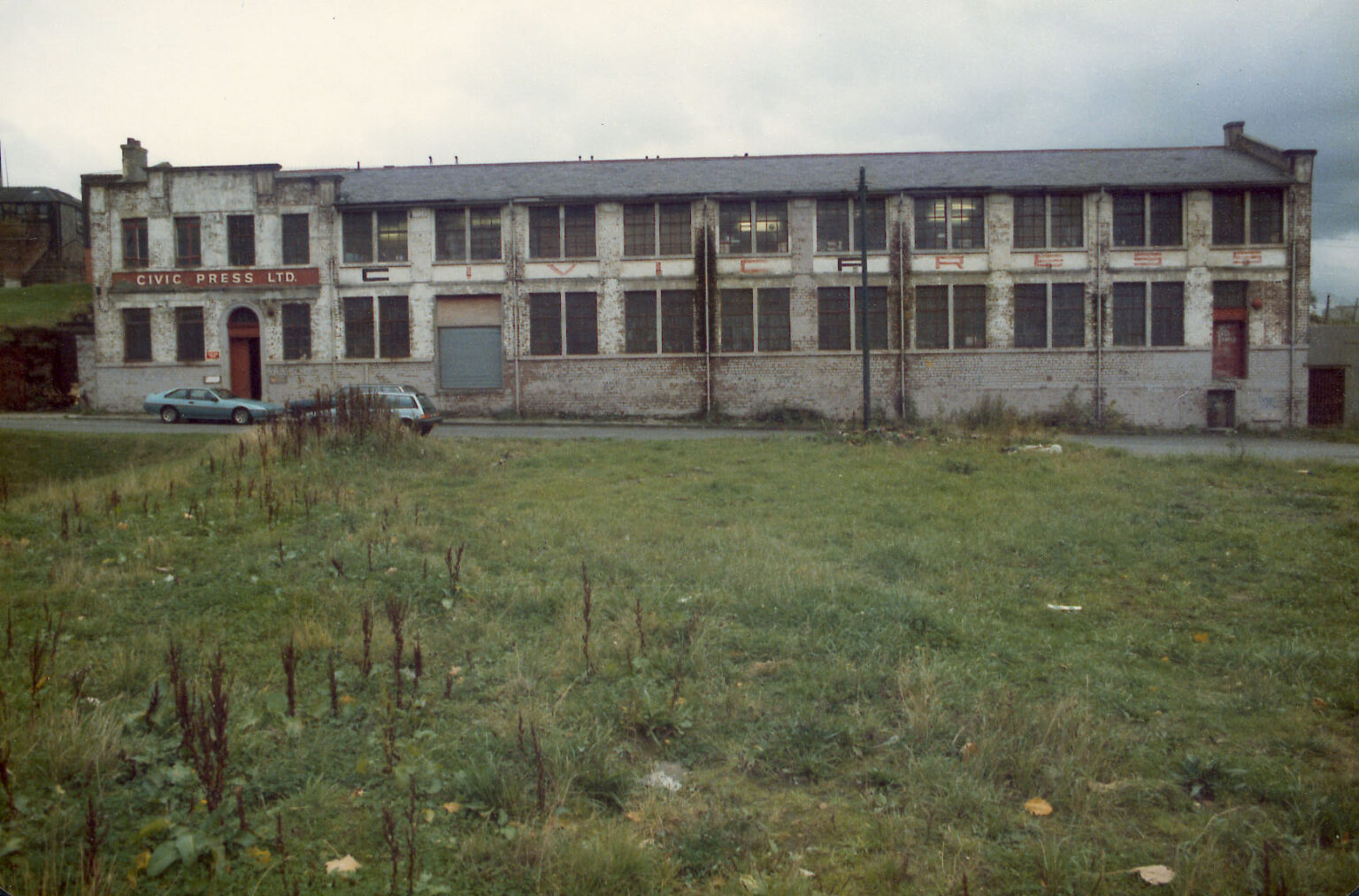 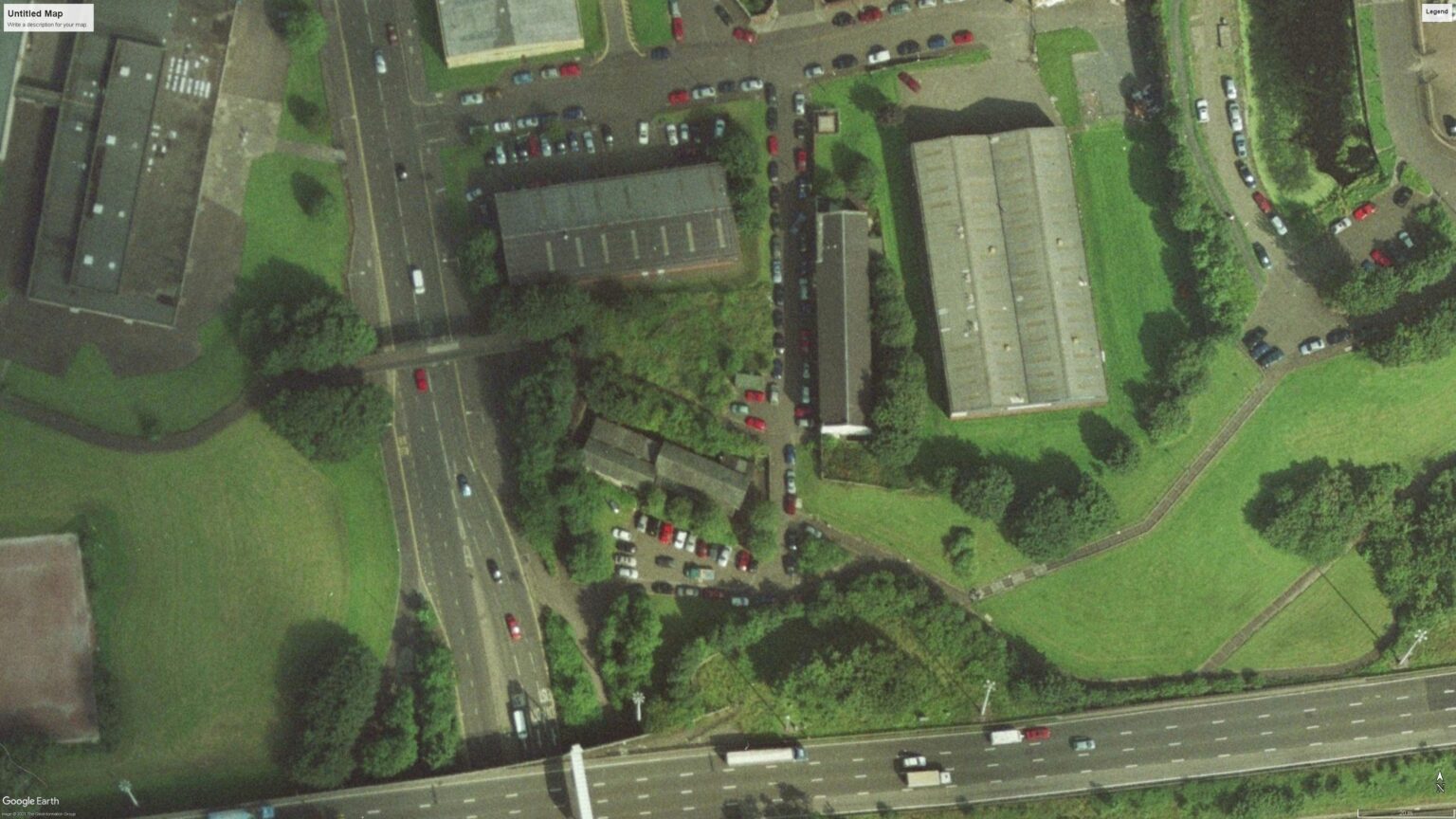